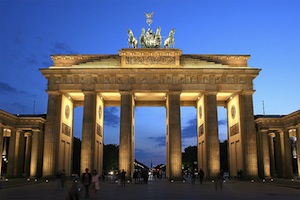 It's a gate. And now you can even walk through it!

Berlin, capital of Germany 1871-1945 and again since 1990 and a major world city. According to P. J. O'Rourke, "the city that Iggy Pop moved to because New York wasn't decadent enough." Though P.J. followed it up by saying, "Forget it. We bombed the place flat in WWII, and they rebuilt it as a pretty good imitation of Minneapolis."

Divided in two for the duration of the Cold War.

The name "Berlin" has nothing to do with bears, but rather stems from the Slavic word for "meadow", not a miracle if you remind its location in a glacial valley.

In 1157, a count called Albert the Bear founded the Margraviate of Brandenburg and became its first markgrave and really kicked off German East Colonization. Settlements arose along the glacial valley of the lower Spree River and at the narrowest point of said valley, the settlement of Cölln (not to be confused with Köln (Cologne) at the Rhine River) was founded on the nearby river isle and the nucleus of the actual town of (Old) Berlin was found on the river's right bank. In 1309, these two towns got a common city hall. The year 1237 as the accepted foundation date of Berlin is actually the year of the first documental mention of Cölln, the actual Old Berlin first mentioned in 1244.

In 1415, Elector Frederick I got the throne over the Margraviate of Brandenburg, ending Berlin's existence as a Hanseatic city and starting the century-long legacy of the Hohenzollern dynasty. After severe losses due to the Thirty Years' War, "Great Elector" Frederic William made a hell of a day to (re-)populate his war-torn country in order to not make it ever again suffer under any games great powers might want to play. The biggest deal was the edict of Potsdam from 1685, essentially an invitation to persecuted French Protestants, the Hugenots, to live in Brandenburg. The lion share of the 15,000 that came settled in Berlin which has always been supported as a strongpoint in the area. In essence, this should become the cornerstone of Berlin as the lone metropole in the rural sea of Brandenburg as it's know to this day.

In 1701, Brandenburg-Prussia become the Kingdom of Prussia, retaining Berlin as its capital. With Prussia growing the following two centuries (e.g. Silesia, Rhineland, Hannover and others), Berlin became the capital of an ever-growing country and therefore a magnet for more and more people, making it especially distinct from the surrounding Brandenburg which also affected its dialect. In essence, the growth of Berlin was the result of the sheer willpower of its rulers.

In 1860/61, Berlin grew its boundaries for the first time in newer times to compromise what in the latest 20th century would have been known as the precincts of Mitte ("Centre", meaning Old Berlin), Wedding, Tiergarten, Kreuzberg, Friedrichshain, Prenzlauer Berg and Gesundbrunnen. In 1871, the Prussian capital also became the capital of the newly founded German Reich. By that time, Berlin already had 800,000 inhabitants.

From then on, the history of Berlin coincides with the history of Germany in general. At the end of World War I, Germany was declared a republic in Berlin and the political street fights there got so nasty that the constitutional assembly for the German Reich was moved to Weimar, hence the Weimar Republic. In 1920, the almost bi-million city of Berlin was enlarged another and the last time, doubling its population to almost four million people.

After the Weimar Republic fell for Those Wacky Nazis that caused World War II and that was lost to the Germans and made the Berlin population plummet to about three million (where it essentially remained since then), the Allies divided the old Reich capital akin to the rest of what remained of Germany. Berlin suffered greatly under being the playball of the superpowers in the upcoming Cold War, leading to its division. East Berlin was quickly integrated into the structures of East Germany, serving as its capital. West Berlin survived the Soviet blockade of 1948/49 via the Berlin Airlift, keeping its status as an island of the free world amid the red sea of communism. For many years, it was easy to flee from the East to the West via Berlin. To turn off this leak in the Iron Curtain, the GDR built the death trap commonly called the Berlin Wall on August 13, 1961.

Due to its special "four power state", West Berlin was not officially part of West Germany, though it was treated like another German state as far as possible. This also meant that West German conscription didn't apply to West Berlin, making it a haven for draft dodgers from "the province".

With the political climate in the world changing, Berlin got directly affected. The Berlin Wall became obsolete when the GDR opened its borders to the West on November 9, 1989. Less than a year later, Berlin once again became the capital of a (re-)united Germany. But it had yet to take until 1999 until the all-German government and parliament finally moved back to Berlin and during much of The Nineties, Berlin was dubbed as the biggest construction site of Europe.

As all of Berlin, its west and its east alike, was a major target for subsidies, it's no miracle that Berlin is often dubbed as "poor but sexy" or even as "the only world city that doesn't cost the world".

Throughout the Cold War, Berlin was "The City of Spies" (a title that has also been held by Lisbon, Tangiers, Beirut, Istanbul, and Casablanca at various points in their history). Spy Fiction from that period will almost always mention Berlin.

The city is generally depicted in these contexts as grey and dreary, especially the eastern part (not quite true, as a third of the city is in the form of parks). It works best at night. Dead drops, double-crosses and defections are the order of the day. Expect someone to attempt to run the Berlin Wall.

If you're lucky, you might see some of West Berlin's (extremely vibrant) music scene and nightlife (being one of the early centers of so-called "Kraut Rock" and David Bowie and Iggy Pop both having recorded there on the basis of its reputation).

Before that, Nazi Germany Berlin is a very oppressive place or a positive deathtrap when you're dealing with the 1945 Battle of Berlin.

Berlin can be seen in the following works:
Retrieved from "https://allthetropes.org/w/index.php?title=Berlin&oldid=1631617"
Categories: