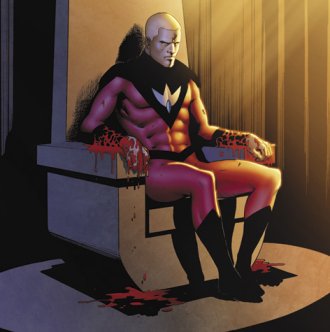 "His truth. His justice. His way. And there's nothing anyone can do about it."

"[I]n any event, I never said 'The superman exists and he's American.' What I said was 'God exists and he's American.' If that statement starts to chill you after a couple of moments' consideration, then don't be alarmed. A feeling of intense and crushing religious terror at the concept indicates only that you are still sane."
—Prof. Milton Glass, "Dr. Manhattan: Super-Powers and the Superpowers," Watchmen

Superhero settings, like any other setting, end up somewhere on the Sliding Scale of Idealism Versus Cynicism. On the more idealistic end, you have settings like mainstream comic books, where there's a sense of wonder and basic decency about the superhuman. While there are villains, they will usually get caught or their plans will be thwarted, and while the setting may take dark turns, it will inevitably right itself. Somewhere in the middle, you have settings that look at superpowers a bit more realistically. While the government may have supers, so will despotic regimes, organized crimes, and terrorist groups. The good guys may win, but victories will be hard fought and likely to have their share of losses.

And then you have these settings. The world's not better for having superhumans. It's worse. The government has no safety net to deal with rogue supers, and it seems like there ain't nothing but rogue supers terrorizing Muggles or freaks on leashes. And that's just the so-called heroes, who are usually anything but, being all-too-aware of their superiority over the rest of the human race and a little too keen on arrogantly flaunting it. Maybe the crisis hasn't happened yet, but the way supers seem to be developing, it's only a matter of time until one of them blows up Pittsburgh and the rest go absolutely nuts. Not that they're exactly mentally-stable to begin with; many will gleefully screw the rules with their powers, but it's almost guaranteed that at least one of them is developing a God-complex as a result of their powers, and that they're only one bad day away from trying to enslave or wipe out all of humanity (which they could easily do within an afternoon).

These are often Deconstructions of more traditional Superhero fare, and often use Take Thats against popular characters like Superman or Spider-Man (or that particular writer's perception of them).

Any hope for a Hope Spot in such a dire scenario may involve calling the Cape Busters.

Stories or articles involving The Singularity sometimes put forth the idea that in Real Life, enhanced humans may cause this situation.

A milder version is Smug Super, in which the superpowered being in question isn't exactly malevolent or evil, but is still something of a jerk.

Trope title is a spin on the famous Nietzsche quote, "Behold the superman"[1] (as in "Behold the Übermensch"). See also With Great Power Comes Great Insanity, Crapsack World, The Magocracy, What Measure Is a Non Super, Transhuman Treachery.

Examples of Beware the Superman include:

Marshal Law: I'm a hero hunter. I hunt heroes. Haven't found any yet.

Magog: They chose the one who'd kill over the one who wouldn't. And now they're all dead.

Superman: Father. Mother. You were wrong. I will always treasure your memory, but you were wrong. I am subject to no man's laws. I am Superman.
Superman: What shall we do with our planet, Lara?

Archmage Jodah: [Sharing the world with planeswalkers] is like sharing your bed with a mammoth. Sure, it may be a nice mammoth, but when it rolls over, you'd still better get out of its way fast.

For generations, the people of Mechanicsburg have served the most depraved, unstable, crazed maniacs in the world! Sure, the Heterodynes were dangerous lunatics - but they became our dangerous lunatics! And as long as we pleased the masters, life was good.[...] So we grew safe, secure and fat from the spoils of conquest.

Green Arrow: Hey, I'm the only guy in the room who doesn't have superpowers, and let me tell you: you guys scare me. What if you do decide to go down there, taking care of whoever you think is guilty? Who could stop you? Me?