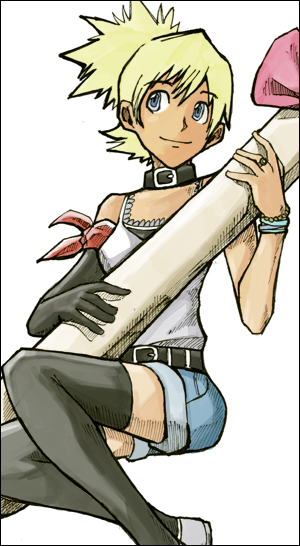 A little different from your standard Werewolf.

Bibliography was a Manga-inspired Web Comic by Cody Shaw, a.k.a. Elagune, about a bookworm with his head firmly out of the clouds named Benjamin Hewitt who takes a different turn down an alley one night. What happens next will change his view of the world - probably forever.

Sadly, Shaw simply stopped updating it at some point in 2012, and never started up again. Its web host, gaijinmanga.com, has since completely disappeared -- not even the Wayback Machine has a copy of the comic.

A discussion about the series remains here at the Giant In the Playground Forum, but like the comic, it simply stops without any warning or closure in early 2011.

Eve: You know of things like werewolves and vampires, right? They're superstition and monster based on stories people used to tell. But all stories are based on fact.

Ben: Why am I so far off-panel?

Ben: What the fu--
Eve: A real superhero!

Mr.Belmont:But don't worry, Ben, my assistant, Gloria will help
Gloria:'WHAM' Hey old man, i'm not going to put up with your sh-

Eve: L-Look! I didn't know it was going to be this wet, okay?