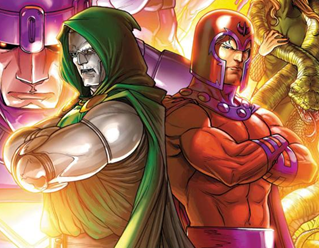 What's worse than one Big Bad? Two Big Bads, possibly more, working in intentional collusion with each other. Sometimes they will work together just fine; being all respectful and well, but more often than not there will be rivalries between them, and they will tend to break out into a literal example of an Enemy Civil War.

Not to be confused with The Dragon (a main villain clearly subordinate to the Big Bad), though if one of them becomes dominant he may reduce the other(s) to the position of Dragon with an Agenda, Dragon-in-Chief and/or The Starscream. May overlap with Unholy Matrimony. Contrast Big Bad Ensemble, where there are also several Big Bads operating simultaneously, but not necessarily working together or even interacting in any way.

Examples of Big Bad Duumvirate include:

Retrieved from "https://allthetropes.org/w/index.php?title=Big_Bad_Duumvirate&oldid=1924892"
Categories:
Cookies help us deliver our services. By using our services, you agree to our use of cookies.