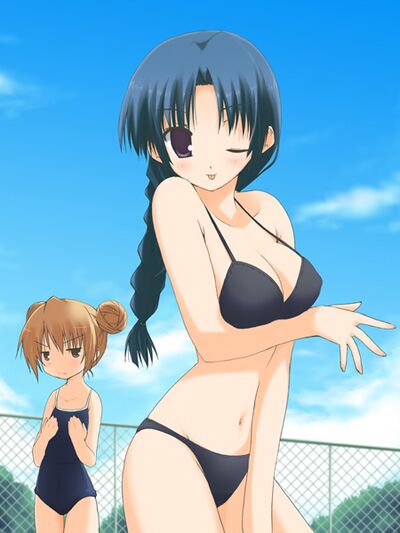 Ami's got it and is flaunting it, giving Taiga a case of A-Cup Angst. (Fan art by Kohinata Sora)

This trope can also apply to the girl who's the first to grow breasts. It's not too different, since often in fiction this will overlap with her having the largest assets when she's a teen/adult (and vice versa), but this isn't entirely Truth in Television.

A female character's reaction to possessing large breasts tend to fall into five basic archetypes, each one being usually associated with certain character types and Stock Phrases (or variations thereof):

Embarrassment - "Please don't stare.": Gets very flustered by being the focus of attention—most particularly if it's from her secret crush. (Previously called "Type 1")

Resentment - "I wish I never had them.": A somewhat frequent evolution of Embarassment. Thinks she's Blessed with Suck, even when others disagree. (Previously called "Type 2")

Indifference - "So I'm bigger than average. Big deal.": Not only does she not exploit it, she may even have no real care for having such "assets" but is usually neutral about this issue. These ladies might show some traces of Pride, as they are not necessarily against the idea of looking sexy with their outfits, but don't plan on relying on their sex appeal; however, while they might not try to exploit their "talents", the Artists/Animators/Camera View will almost certainly do it for them. (Previously called "Type 3")

Pride - "When you've got it, you should flaunt it!": Prone to parading their "assets" in the presence of male company (or female company, for homosexual ones... Or both, for bisexuals), sometimes with a little extra bounce in their step, and may often brag about them, unknowingly in front of less fortunate, usually younger and self-conscious female characters. Likely to view their "development" as a way to get what they want, they are proud of their physical attractivenesss. Also unlikely to openly tease distracted young men for staring too long, as it makes them feel hot. (Previously called "Type 4")

Ignorance - "Why do men keep running into lamp posts while looking at me?": This is a girl who is so innocent/oblivious/naive that she genuinely can't make the connection between the increase of male accident rates in her presence and where their eyes are straying to. (Previously called "Type 5")

For self-image with smaller assets, compare A-Cup Angst and its opposite, Petite Pride.

Note: "Multi-Type" is strictly limited to cases where a single character simultaneously qualifies for two or more of the above types; "evolving" from one type to another is not "Multi-Type".

Retrieved from "https://allthetropes.org/w/index.php?title=Big_Breasts,_Big_Deal&oldid=1924090"
Categories:
Cookies help us deliver our services. By using our services, you agree to our use of cookies.