Everything About Fiction You Never Wanted to Know.
(Redirected from Big Damn Kiss)
Jump to navigation Jump to search 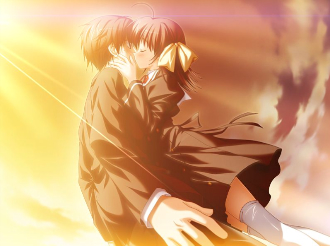 "Since the invention of the kiss there have been five kisses that were rated the most passionate, the most pure. This one left them all behind."
—The Princess Bride

The moment when awesomeness and romance meet, when an otherwise epic scene is topped with a kissing scene that is quite epic on its own as well.

In media forms that use background music, it might often overlap with a Crowning Music of Awesome as well, or at least it will be located at a climatic part of the soundtrack.

Some tropes—such as Smooch of Victory, Hollywood Kiss, Concert Kiss, Beach Kiss, and Lip-Lock Sun-Block—are almost always examples of this as well.

Examples of The Big Damn Kiss include:

You're right, who needs dinner?

Spike: "We kissed, you and me, all Gone With the Wind with the rising music and the rising...music."

Delenn: We finally have, as you say, a fighting chance.
Sheridan: [after a long Held Gaze] ...I don't know what to say.
Delenn: Then say nothing...
[Sheridan proceeds to snog her senseless]

Tarvek: When she kissed Wulfenbach, my glasses started to melt.

Lisa: Eww, Knock it off!