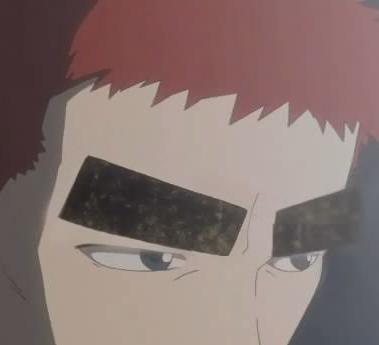 One Hundred And Ten Percent Lady-Proof

An extremely old Japanese artistic convention is giving men bushy eyebrows. The manly oyaji usually has them, and it makes his expressions more imposing and tougher. A lot of older Shonen manga use this style to great effect. Unless it's specifically part of the art style, Big Ol' Eyebrows are a common Art Shift gag when a character is being overdramatic.

Women tend to get very thin eyebrows. Thicker eyebrows are usually just a convention to make their faces more noticeable or make their facial expressions funnier. But in a few anime, woman have thicker eyebrows which resemble long commas. It's the case of Momoko from Ojamajo Doremi and Honoka, Saki and Kurumi from the Pretty Cure franchise.

Examples of Big Ol' Eyebrows include:

While hardly big by the standards of this page, some women also have Big Ol' Eyebrows - especially in comparison with the usual female "plucked eyebrow" look.