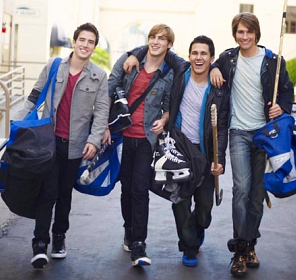 Big Time Rush is a Nickelodeon Sitcom about a boy band created by Scott Fellows (You know? The dude behind Ned's Declassified School Survival Guide and Johnny Test). Fairly standard fare, spiced up with fresh faces and decent music. Debuted in November, 2009 and is still ongoing.

Kendall, James, Carlos and Logan are four hockey players from small-town Minnesota. James dreams of becoming a pop star, so when Gustavo Rocque, the ridiculously stuck-up producer for Rocque Records, comes to their town looking for talent, he gets all of his friends to audition with him. Unfortunately, Gustavo hates him but loves Kendall, who doesn't do the whole rich and famous act. But, in the end, he agrees to record some demos in Los Angeles as long as Rocque takes his friends, too, and makes them a singing group. They find out they only have three days to become a passable band, and proceed to ensue hilarity.

Now with its own Ho Yay and Shout Out page.

For clarification, Lolo is a chimpanzee. And even he face palmed at that one.

Retrieved from "https://allthetropes.org/w/index.php?title=Big_Time_Rush&oldid=1742541"
Categories:
Cookies help us deliver our services. By using our services, you agree to our use of cookies.