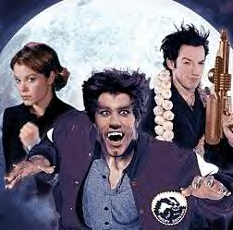 Local high school jock Tommy Dawkins (Brandon Quinn) has nothing to worry about until he's bitten by a werewolf. Not knowing what to do, he befriends the local effeminate genius goth Merton Dingle (Danny Smith) and together they team up to fight the weirdness and monsters that pour into the town of Pleasantville, even though almost everyone believes that their protector, "The Pleasantville Werewolf", is viciously dangerous. The second season added a third friend to the cast, Lauren 'Lori' Baxter (Aimée Castle).

The series lasted from April, 1999 to April, 2002. A total of 65 episodes in 3 seasons. An incredibly lighthearted show that essentially existed to parody shows like Buffy the Vampire Slayer and Charmed, and replace their Wangst with lighthearted slapstick and goofy wordplay. A Canadian production, it ran on the Fox Family Channel and YTV.

Tropes used in Big Wolf on Campus include:
Retrieved from "https://allthetropes.org/w/index.php?title=Big_Wolf_on_Campus&oldid=1911493"
Categories:
Cookies help us deliver our services. By using our services, you agree to our use of cookies.