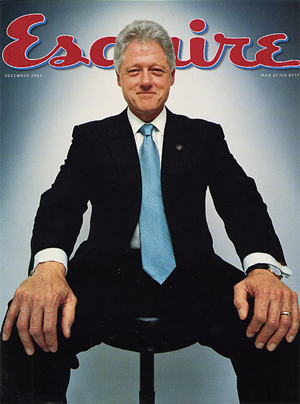 Now everyone gets to see him from this angle.

Bill Clinton was President of the United States from 1993-2001 (the first Democrat since FDR to be elected to two terms), ushering in an era of Democrats in power in the White House after twelve straight years of Republican rule. He is largely known in parody/satire for his playing of the saxophone (Which is, of course, Truth in Television due to Clinton being a skilled player of the sax) and as a Handsome Lech who was caught in a series of sex scandals, which threatened his Presidency towards the end of his second term.

Clinton ran for office with his wife Hillary by his side, and made no secret that she would be a part of in his administration; in fact, "two for the price of one" was one of their selling points. Of course, this led to all sorts of snark, especially when Hillary herself ran for President in 2008.

Clinton's time in office was known primarily for two things: a strong economy, and a lot of scandal. Allegations of unscrupulous business practices surrounding a failed real estate venture, the "Whitewater Development Corporation," damaged Bill's credibility, though no evidence was uncovered that could convict or even implicate the couple in wrongdoing; this matter, along with a couple of other bizarre incidences ("Travelgate" and "Filegate") were investigated by the Whitewater Independent Counsel with equally little traction. Every single one of the criminal accusations against him was eventually dismissed to the chagrin of Ken Starr, the specially appointed Federal prosecutor in charge of investigating the President.

Finally, in '98 Clinton was implicated as having had an affair with intern Monica Lewinsky; Hillary ensued. He used Weasel Words with great conviction (in retrospect, the infamous "that depends on what your definition of 'is' is" might have been better phrased as "are you asking the question strictly in the present tense, or about the past as well?") until Lewinsky produced a dress with some incriminating evidence upon it, whereupon Clinton came clean. Eventually he was impeached by the US House of Representatives on the pretext of lying under oath about his affair (the impeachment was in the planning stages before Clinton even testified), though the trial in the Senate resulted in his acquittal.

After leaving office he faced disciplinary action by the Arkansas state bar; Clinton agreed to a suspension of his license to practice law in Arkansas for five years in return for the agreement of the Whitewater Independent Counsel that he would not be prosecuted in Federal court for perjury. As a result of the Arkansas disciplinary action Clinton faced disbarment from the US Supreme Court bar; he resigned his license to practice before the Supreme Court in order to avoid disbarment.

Clinton also instituted the now repealed "Don't Ask, Don't Tell" policy, which allowed gays and lesbians to serve in the American armed forces only if they stay in the closet. This was actually a liberalization of prior policy, under which the military could freely investigate the sexuality of its soldiers and "out" the gay ones, who would then be discharged from service. Like most political compromises, this pleased neither side of the debate, although it did inspire a pretty funny SNL parody of the movie Glory. His Presidency saw The Yugoslav Wars and his attempts to squash al-Qaeda, which were widely bashed at the time by conservatives, who claimed that Clinton's attempts to eliminate the terror group and their leader Osama bin Laden were nothing more than ploys to distract the public from the Republican-spearheaded attempt to impeach him.

Clinton would again enter the spotlight in 2016. Bill played a significant role in his wife's campaigning, doing campaign work traditionally associated with the Vice Presidential candidate while the actual candidate was rarely seen. His wife's presidential run would also reignite scandals and subject him to new ones. Bill's many rape accusations, and the claimed role of Hillary in covering them up, greatly damaged her credibility. The duo's Clinton Foundation, which Bill played an active part in, was accused of being a Fake Charity to sell Hillary's influence as Senator and supposed next President with very little money was spent on actual charity.

He had perhaps the widest range of satirical portrayals of any president: at the beginning his comedic persona was that of a hickish southerner; a "Bubba" who enjoyed too much fast food and was out of his league in Washington. As his presidency went on, parodies increasingly played upon a "Slick Willie" portrayal: a fast-talker in both the situation room and the bedroom, able to invoke Refuge in Audacity to barrel through scandals with his popularity rating remaining high. Also, due to her involvement in politics, Hillary Clinton has perhaps been the target of more satire than any other First Lady: most of these satires played up her own ambitious nature and the notion of a "Faustian Deal" with her husband, where she would stay with him no matter how may affairs he might have, in exchange for aiding in her own ambitions for power and political office.

Retrieved from "https://allthetropes.org/w/index.php?title=Bill_Clinton&oldid=1868909"
Categories:
Cookies help us deliver our services. By using our services, you agree to our use of cookies.