Everything About Fiction You Never Wanted to Know.
Jump to navigation Jump to search
/wiki/Billy Mayscreator 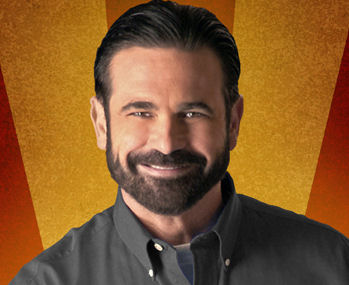 "HI, BILLY MAYS HERE FOR ALL THE TROPES!"

If the world of infomercials and late night advertising can be said to have stars, this guy was one of the biggest. Large, loud and impossible to ignore, this pitchman was a familiar face and voice to anyone who watches TV in the United States and Canada. Even if you didn't want him to be.

He gave his enthusiastic endorsement to such products as Zorbeez, OxiClean, Kaboom, Orange Glo, Hercules Hooks and a plethora of late night merchandise.

Beginning in April 2009 and alongside his best friend and equally recognizable pitchman Anthony "Sully" Sullivan, he co-hosted a reality show on the Discovery Channel titled Pitchmen, which showed how his company chose the products they pitch and how they created their ads. The final episode of the show --broadcast two weeks after his death--was a tribute episode to Mays.

Not to be confused with the baseball player Willie Mays.

Before his death he called out Vince Offer. And then someone made an awesome video of what their "pitch-off" would be like.

On June 28, 2009, BILLY MAYS was found dead in his home in Tampa Bay, Florida due to hypertensive heart disease. He was age 50. His funeral was on July 3, 2009 and he was buried in his trademark blue shirt and khaki pants, which were also worn by his pallbearers. A coroner's autopsy reports suggest cocaine may have contributed to Mays' death by accelerating the development of heart disease. His family feels that the autopsy mistook his back medication for cocaine. A second medical examination in October confirmed that cocaine was not a factor in his death.

Retrieved from "https://allthetropes.org/w/index.php?title=Billy_Mays&oldid=1680009"
Categories:
Cookies help us deliver our services. By using our services, you agree to our use of cookies.