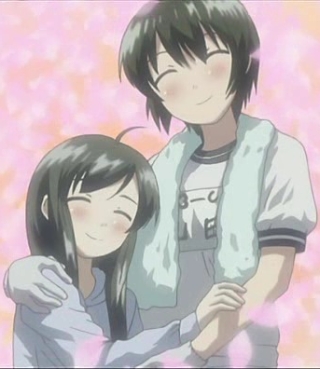 Junior high school student Kyou and her sister, elementary school student Asu, live together in a cheap run-down apartment since their mother died and their father ran off to hide from loan sharks. They are very close, rarely missing an opportunity to let the other know how much they care for her. They are also mostly low on cash, but manage since Kyou holds a job delivering newspapers. Asu holds the fort by doing household chores and is also quite a good cook, which gets appreciated by Kyou a lot.

The show deals with the sisters' ordinary daily lives and the people they encounter. Their relationship tends to be barely on the right side of saccharine sweet, since they are very clingy and hardly ever seem to quarrel. They also often respond dramatically to events, making them worry about each other too much and panic immediately over little stuff. Still, the sisters' characters are endearing enough to pull it off and some of the other characters contrast nicely with them--especially the Echigoya sisters. The anime, based on a manga series by Izumi Kazuto, ran for 10 episodes in 2006. When you can get past the not entirely realistic setting of two underage girls left to their own devices in an apartment in modern Japan, the show is quite an enjoyable watch, with interesting characters, splendid voice acting and a cheery, catchy opening theme. And whoever isn't moved to tears by the end of the last episode is surely made of granite.