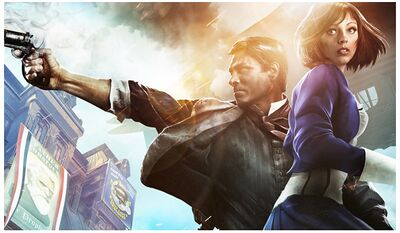 Bring us the girl, and wipe away the debt

You can picture happy gatherings
'Round the fireside long ago,
And you think of tearful partings
When they left you here below.
Will the circle be unbroken
By and by, by and by?
Is a better home a-waiting
In the sky, in the sky?

—Will the﻿ Circle Be Unbroken, as sung by Elizabeth

BioShock Infinite is the third game in the BioShock series, released on March 26th, 2013. It takes place in 1912, in the floating sky city of Columbia, "designed to demonstrate to the world by example the founding democratic principles of the United States, the product of American ideals, endeavor and industry." However, a visit to China by the city during the Boxer Rebellion in 1900 revealed a much darker purpose on the part of its makers: the city revealed itself to be heavily armed, and bombarded a group of Chinese civilians. This incident prompted the American government to disown Columbia and cause it to go rogue and disappear into the clouds. Now it exists as a Death Star without an Empire, a roaming boogeyman imposing its will on whatever unfortunate target it chooses.

The player is Booker DeWitt, a disgraced Pinkerton Detective sent to the city by a mysterious stranger to find a woman named Elizabeth who was locked up in Columbia since she was five. Only giving DeWitt a few sparse details, he tells Booker that he'll transport him to the city if he decides to accept.

But predictably, this mission won't be simple or easy: since it went rogue, the city has fallen into a violent civil war between the Founders, the ultranationalist, xenophobic ruling class, led by Zachary Hale Comstock; and the Vox Populi, a group led by Daisy Fitzroy which initially sought to open Columbia to people of all races and religions before years of conflict morphed them into a terrorist group that fights out of blind hatred. Both factions believe that Elizabeth is the key to winning the conflict, which will inevitably prove to be a problem.

There is also the matter of Songbird - a massive clockwork creature that looks like a deranged cross between a bird and a gargoyle and is often referred to simply as "Him" - whose sole purpose is to retrieve Elizabeth, and violently kill anything that tries to stop it...

While game head Ken Levine has said that BioShock Infinite takes place in a different universe from the original games, a key game mechanic is the manipulation of portals that lead to different timelines.

Tropes used in BioShock Infinite include:

Booker: (While contemplating how best to escape a turret shooting at him, he pulls out a hook.) Well, nothing ventured... (Leaping onto a rail hanging thousands of feet above ground.) nothing gained!
(Later, upon finding Elizabeth.)
Booker: Hey, you don't look so good.
Elizabeth: I'm okay, I just need a moment. (A Handyman is heard screaming towards them.) A moment we don't have.

Elizabeth: (After Booker shoots a Handyman.) That's just making him angry!
Booker: He was already angry!