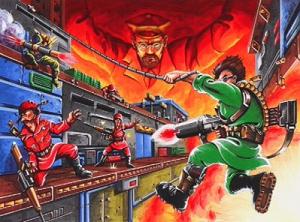 Our hero Ladd Spencer, as he fights the evil imperialistic forces of Master-D (clearly not Hitler with a fake beard and sunglasses).

Bionic Commando (a.k.a. Hitler's Revival: Top Secret) is an action-adventure side-scrolling platformer for the Nintendo Entertainment System made by Capcom. You play as Ladd Spencer (or Rad in later versions), who as the titular commando wields various guns and also has a bionic arm, which he can use as a grappling hook to swing across the levels. Interestingly, he is unable to jump, and is instead dependent on the arm to climb around and cross gaps. (Perhaps a form of Gameplay and Story Segregation?)

Ladd's job is to rescue a soldier named "Super Joe" from the Imperial Army (who were a Neo-Nazi nation in the Japanese version). Along the way, he shoots various mooks, communicates with friendly agents, wiretaps enemy conversations, but most importantly, learns the purpose of the Imperial Army' "Albatross" project: which involves the revival of the project's original leader Adolf Hitler ("Master D" in the American version).

Oh, and this game is very Nintendo Hard. Don't say you weren't warned.

Bionic Commando is a sequel of sorts to the very different, top-down shooter Commando (Super Joe was the hero of Commando), and the game includes several mini-levels based on the original. It in turn had its own sequel, a similar game but with a more sci-fi look, for the Nintendo Game Boy. It also received another sequel for the Game Boy Color, titled Bionic Commando: Elite Forces.

Spencer is one of the many playable characters in Marvel vs. Capcom 3.

Tropes used in Bionic Commando include:
Retrieved from "https://allthetropes.org/w/index.php?title=Bionic_Commando&oldid=1911450"
Categories:
Cookies help us deliver our services. By using our services, you agree to our use of cookies.