Everything About Fiction You Never Wanted to Know.
(Redirected from Birth By Sleep)
Jump to navigation Jump to search 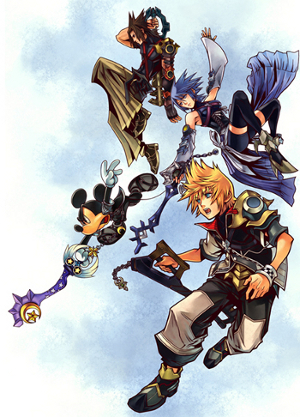 Kingdom Hearts: Birth by Sleep is a prequel to the Kingdom Hearts series set 10 years before the first game. The game's story focuses on the efforts of the three main characters--that is, Terra, Ven, and Aqua--to find the missing Keyblade master, Master Xehanort, and his apprentice, Vanitas. The story is split into three separate scenarios, each focusing on one of the characters' efforts to locate Master Xehanort and Vanitas. While the characters will be alone most of the time during their journey, there will be times when the characters' paths will cross (a storytelling gimmick previously used by Squaresoft in Treasure of the Rudra and Threads of Fate).

All three of the characters are equally important story-wise. The game focuses on several main themes such as Ven's identity and connection with Sora as well as the mystery behind the memories of the original series' primary villain, Xehanort. Each character's story takes between 8 and 15 hours plus additional prologue and epilogue chapters, for a total of at least 30 hours of gameplay.

The player can play the three different routes in any order they so choose, but the recommended route (and the route that makes the most sense story-wise) is Terra, Ventus, then Aqua.

Tropes used in Kingdom Hearts: Birth by Sleep include:

Retrieved from "https://allthetropes.org/w/index.php?title=Kingdom_Hearts:_Birth_by_Sleep&oldid=1675387"
Categories:
Cookies help us deliver our services. By using our services, you agree to our use of cookies.