Everything About Fiction You Never Wanted to Know.
(Redirected from Bizarre Sexual Polymorphism)
Jump to navigation Jump to search 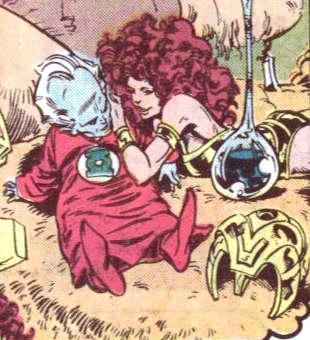 They're the same species? You're kidding, right?

Jen: Wings? I don't have wings!


Kira: Of course not. You're a boy.
—The Dark Crystal

As explained elsewhere, we primates have certain visual cues we rely on to tell a woman from a man; men are generally taller and more muscular. Women are shorter, more curvaceous and have breasts. This is because we are Sexually Dimorphic animals.

This is also the case in several other animal species, particularly those who also rely mostly on vision, and communicate largely with visual displays. The most common kind of dimorphism is when males and females of the same species sport different colors and markings.

Then there are a few species (relatively speaking) in which males and females look wildly different. One sex may even have an entire physical feature that the other lacks (other than, you know, the obvious one) -- if the other sex doesn't sport his/her own trademark physical feature. In a very few species, males and females may be different enough to look like completely different animals.

And science fiction writers, when inventing aliens, love to run with this.

There are several alien or fantastical creatures in which the sexes are wildly different. This tends to run towards the extreme end of the Earth scale and beyond: they could be greatly unequal in strength or intelligence; one sex could even be reduced to an inert breeding machine (like the real-life scale insect) or parasite (which actually does happen on earth with deep-sea dwelling angler fish)!

Taken to the logical extreme, this leads to Improbable Species Compatibility.

Do also take note that this trope, in spite of its name, is not limited to species with binary sex systems.

Examples of Bizarre Sexual Dimorphism include:

The females, on the other hand, almost all stay small and grublike, and after a certain time are carried by the pig-like males to the trees, and are impregnated by said trees via pollen. Then, when the young they're carrying are ready to be born, they eat their way out of their mother. In addition, the occasional female will develop into a pig-like form like the males to serve as a matriarch, and eventually also be vivisected to become a "mothertree", which holds all the young and nourishes them with its sap.]] "Bizarre sexual dimophism" doesn't even begin to cover it.