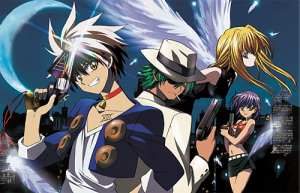 From left to right: Train, Sven, Eve, and Rinslet.

Black Cat, by manga artist Kentaro Yabuki, centers around a pair of bounty hunters, also known as "Sweepers", Train Heartnet and Sven Vollfied. Perpetually struggling for cash and jobs, they each harbor a secret: Sven is a former agent of an international police force, and Train used to be XIII, a deadly assassin for the world-spanning organization Chronos.

They would be content to just live out their lives chasing bounties and living a carefree lifestyle, but Train's old life has a habit of catching up to him: former partner Creed Diskenth is attempting to overthrow Chronos and take over the world with his own group, the Apostles of the Stars. And Creed wants Train to join him, no matter the cost. And did I mention that Creed killed the woman who convinced Train to abandon the assassin's lifestyle?

Allied with world-renowned cat burglar Rinslet Walker and living bioweapon Eve, Train and Sven try to live a carefree life even as both Creed and Chronos attempt to drag both into an escalating global conflict.

Now available on Hulu in subbed and dubbed format. (If you live in the U.S.)

Not to be confused with the same-named Marvel Comics character. Or the horror movie The Black Cat. Nope, not even Edgar Allan Poe's poem.

Tropes used in Black Cat (manga) include:
Retrieved from "https://allthetropes.org/w/index.php?title=Black_Cat_(manga)&oldid=1964302"
Categories:
Cookies help us deliver our services. By using our services, you agree to our use of cookies.