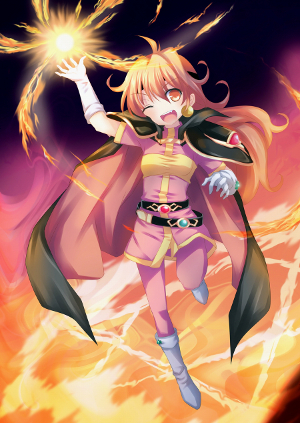 She may be small, but don't underestimate her. This spunky little thing is packing enough heat to take down a Swiss Bank, and that's just with the spells she learned in kindergarten.

Physically, the Black Magician Girl is weaker than the fighters, often being a Squishy Wizard or Glass Cannon and being unable to attack for much, if any, damage. Her weapon of choice is usually a rod or staff, although ranged weapons are not uncommon, nor are improbable ones such as books. Her primary role in combat is to stand back and pelt the enemy with Fire, Ice, Lightning, not to get down in the mud, the blood and the beer with the melee types.

She will often be younger than The Hero, both physically and emotionally. Due to this, she will almost never be a love interest for him.

Black Magician Girls are, as the name would suggest, usually female, but male examples do exist. Black Magician Boys will be as immature as their female counterparts and may be physical cowards.

Subtrope of Black Mage. Compare to Lady of Black Magic, the other character archetype for Black Mages found in fantasy. In personality and skillset, this trope is the inverse of the White Magician Girl, for which this character type is often a Foil. See also Black Magic, which is magic that is evil, and White Mage.

NOT to be confused with Dark Magical Girl.

Examples of Black Magician Girl include:

Retrieved from "https://allthetropes.org/w/index.php?title=Black_Magician_Girl&oldid=1488911"
Categories:
Cookies help us deliver our services. By using our services, you agree to our use of cookies.