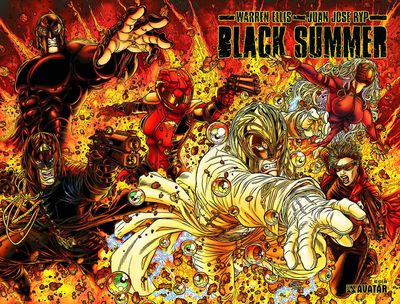 For the record, they're the Seven Guns, not Black Summer.

Black Summer is an eight-issue (#0-#7, May, 2007-July, 2008) comic miniseries written by Warren Ellis, drawn by Juan Jose Ryp and published by Avatar Press. On July 3, 2006, the president of the United States is assassinated by John Horus, the most powerful member of a superhero group called The Seven Guns. After claiming that the president and his advisers had all been criminals, and that they were just being brought to justice, John Horus then orders the nation to go about re-electing new leaders, while making it clear that he won't tolerate anyone coming after him.

This sets off a chain of events that makes the government start hunting down the remaining members of The Seven Guns, including Tom Noir, one of the original Guns who disappeared after another member and lover, Laura, was killed in a bombing. Making matters worse is that one of the people hunting them is Frank Blacksmith, an unofficial "eighth" member of the team who had been thought dead. With the whole U.S. military after them, Tom and the other Guns must figure out how to survive, and what to do about John Horus.

Tropes used in Black Summer include:
Retrieved from "https://allthetropes.org/w/index.php?title=Black_Summer&oldid=1911336"
Categories:
Cookies help us deliver our services. By using our services, you agree to our use of cookies.