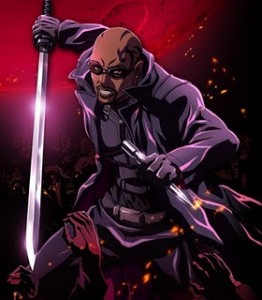 Blade is the fourth and final of the Madhouse anime series based on Marvel Comics characters. A "Daywalker" born with all of the strengths and none of the weaknesses of a true vampire, titular vampire-hunter Blade is out for revenge against the powerful Deacon Frost, the vampire who killed his then-pregnant mother and caused him to become half-vampire. The story follows Blade as he tracks Frost through modern day Southeast Asia, where he runs into Frost's underground society of vampires, Existence. Making both new allies and enemies along the way, Blade soon discovers a vampire plot in Vietnam that could change the world for the worse.

Featuring a story written by Kenta Fukasaku, son of the late Kinji Fukasaku, the series premiered on July 1st, 2011 in Japan. The dubbed version began airing in January of 2012, with Harold Perrineau providing the voice for Blade.

Tropes used in Blade (anime) include:
Retrieved from "https://allthetropes.org/w/index.php?title=Blade_(anime)&oldid=1815890"
Categories: