Everything About Fiction You Never Wanted to Know.
< Bleach
Jump to navigation Jump to search 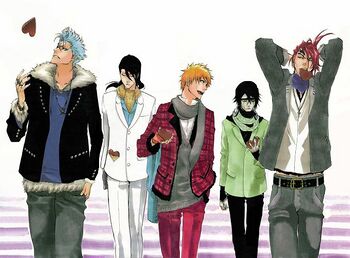 Tropes used in Bleach/Ho Yay include:

Ichigo has Ho Yay moments with pretty much every one of his current and former rivals, starting with Ishida, and all the way up to Aizen (see chapter 388 below). It's safe to say that Ichigo is a Ho Yay Relationship Sue.

How 'bout any of the same-gender shinigami/zanpakuto relationships? Weird case of Selfcest and Unfortunate Implications, true enough, but they're beings unto themselves - people in their own right - just spawned from, and based on somebody elses' consciousness.

Hush, everyone! Father and Mother are talking!