Blessed Are the Cheesemakers 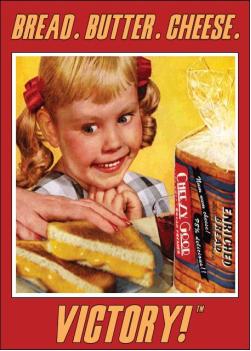 Cheese: Made of win! And fear.

"Poets have been mysteriously silent on the subject of cheese."

—A book in Dragon Quest VIII.

Ah, cheese. It's just one of those Inherently Funny Foods that shows up quite often in the TV Universe and can be used for either good or evil. Perhaps it has something to do with how odd a food it is, when you stop to think of it. You squeeze a creamy white liquid from a cow, stir it a long time, mix in fungi, and leave it to basically rot. And then you eat it. Makes sense.

A popular treat for mice and rats (in real life, any fatty food will do; peanut butter being more popular), and Trademark Favourite Food of the Surrender Monkey.

For some reason (probably regarding the Rule of Perception) Cartoon Cheese always comes in wheels or wedges of something holey that, if pressed for specifics, most people would call "Swiss cheese". Some mature varieties may have visible stink lines.

The Trope Namer is a line in Monty Python's Life of Brian.

Examples of Blessed Are the Cheesemakers include:

"He lost his piece of bread in the fondue a third time!"
"Into the lake with weights tied to his feet!"

There are no cats in America
and the streets are paved with cheese.

Kuzco: You know what? On second thought, make my omelette a meat pie.
Kronk: Meat pie. Check.
Yzma: Kronk. Can I order the potatoes as a side dish?
Kronk: I'll have to charge you full price.
Yzma: (growls in annoyance)
Kuzco: Hey, how about a side of potatoes, buddy?
Kronk: You got it. Want cheese on those potatoes?
Yzma: Thank you, Kronk. Cheddar will be fine.
Kronk: Cheddar spuds coming up.
Kuzco: Spuds yes, cheese no.
Kronk: Hold the cheese.
Yzma: No, I want the cheese!
Kronk: Cheese it is.
Kuzco: Cheese, me no likey.
Kronk: Cheese out.
Yzma: Cheese in.
Kronk: Ah, come on, make up your mind.
Kuzco: Okay, okay, on second thought...
Yzma and Kuzco: (together) Make my potatoes a salad.

Man: Are you a man or a mouse?
Groucho: Put a piece of cheese on the floor and you'll find out.

("The Wire" has replaced drugs AND alcohol as an addiction. Basically a wire is dropped into the pleasure center of your brain and runs a constant (low) electric current.)

"The poets have been mysteriously silent on the subject of cheese." Alarms and Discursions

B'Elanna: Get that cheese to sickbay.

Customer: Excuse me, is this a cheese shop?
Shopkeeper: (shaking head politely) ... No, sir.
Customer: (to camera) Well, that's that sketch knackered, isn't it, then!

Phoebe: They want to live in a house made of cheese. I don't know how you fight that.

"And next week, we'll demonstrate our curdless phone."

Katrina: It was the cheese. The cheese was my undoing. This is the miracle of life melted over these chili fries. The bacterial flirtation with enzymes. The co-mingling of friendly micro-organisms giving birth to curds and whey, "And from dust He created the universe."
Jaye: The dairy-board must love you.

Sheogorath: Wonderful, Time for a celebration... Cheese for everyone!

Sheogorath: You know, I was there for that whole sordid affair. Marvelous time! Butterflies, blood, a Fox, a severed head... Oh, and the CHEESE! To die for!

Spirit Eater: And what does it mean if a portal smells like cheese?
Safiya: Well, I suppose it would depend on what kind of...That wasn't a serious question, was it?
Spirit Eater: It wasn't at first, but now I'm kind of curious...

Vork: The price difference here between a cheeseburger and a hamburger is one dollar. Now, if you divide twelve into $2.95, the cost of a pack of Kraft Deli Deluxe mild cheddar slices, each slice costs 24.5 cents. If you bring your own cheese, that's a saving of 75.5 cents per burger. Anybody requiring cheese can pay me so accordingly. Go ahead and round up.
Tink: What the fudge? (Except she didn't say fudge...)
Vork: I want to grow my money, Tink. Not spend it on cheese gouging!
Codex: Ok, forget the cheese!
Clara: Yeah, you guys, cut it out, OK? Cut the cheese out! Cut the cheese!

Bugs: Only a rat would shoot a guy... (turns around)... in the back.
(Elmer starts to pull on the trigger)
Bugs: I reiterate: only a big, fat rat would shoot a guy in the back.
(Elmer shoots -- a smoke cloud appears where Bugs was)
Elmer: (gloating) So I'm a big, fat wat!
Bugs (appears out of smoke, imitating Jerry Colonna) Ah! Have some cheese, rat!
(shoves cheese wedge on Elmer's mouth)

Stimpy: Presenting the Cheese-A-Phone. Now we can talk to cheeses, anywhere in the world, regardless of their foreign tongues. Go ahead, Ren, say something in Limburger.

Arnold: It seemed like last year we celebrated the festival of the Holy Provolone.

Arnold: And I was thinking maybe I'd invite Lila to go with me.
Gerald: Lila? Arnold, are you forgetting something? She doesn't "like you-like you", she just likes you.
Arnold: But if I invite her to the Cheese Festival, and we have a really good time together, maybe she'll start to "like me-like me."
Gerald: Yeah, sure, Arnold -- I mean, nothing brings people closer together than cheese.