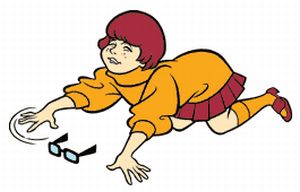 Oooohhhh, where could they be?

"My glasses! I can't see a thing without my glasses!"

—Velma, from the various Scooby Doo shows (whenever they need somebody to be incapacitated)

"My glasses! I can't be seen without my glasses!"

—Johnny Bravo, in a crossover with Scooby Doo (after tripping with the aforementioned and making both drop their glasses; then they pick up each other's)

Nobody who wears glasses in TV ever needs them for minor vision correction, except for reading glasses that are worn mainly to make the character look wise. Almost all TV characters with glasses have such bad vision that if they are deprived of their spectacles, they are practically blind—usually hammered home by showing (briefly) the character's uselessly blurry point of view or the character making a Blind Mistake.

Naturally, these poor souls are almost always subject to Dropped Glasses. For some unfortunate Tropers, this is Truth in Television, though paradoxically a sign of technological improvement as people who would have found it difficult to function without a prescription of -9 can now be fully productive members of society (Though even then, it's nowhere near as bad...).

In animation, when such a character's glasses are lost, their eyes shrink down to pinpoints, which indicates either that they are squinting to see, or to point out the jarring real life effect of seeing someone who has huge eyes when seen through heavily magnified glasses without their glasses. An anime variation on this is usually represented with the character's eyes being replaced by 3's or 3_3, which is another stylization of squinting.

Oddly, when a character discards his/her glasses in order to look more attractive or more badass, that character invariably turns out not to be blind without 'em after all (unless it's a parody).

Note: The legal term "legally blind" is with corrective lenses (per linked article). Saying you are "legally blind without your glasses" is absurd.

Further note: because special lenses are needed to keep eyeglasses from flashing stage lights, and reflecting filming equipment, any time an actor wears glasses, it's a character choice, and the glasses are special stage glasses, which the actor may or may not need. If an actor needs corrective lenses, and it's deemed wrong for the character, the actor has to do without, or wear contacts.

Truth in Television, albeit much rarer than it is in fiction.

Examples of Blind Without'Em include:

"Wait, my eyes aren't that bad; I call still read the large-print books. (eyes fall out) Well, lucky I know how to read braille. (hands fall off, Big No, tongue falls out)

Sophia: Here Dorothy, I brought you three. A lifetime supply.

Mook: I can see your strength... and your weakness.
(swipes Rae's glasses)
Mook: Aha! Try fighting without these!
(POW)
Rae: I'm near-sighted, idiot.

Johnny Bravo: I'm only going to say this once...Don't. Touch. The Glasses!

Viper: (dodging every blast) I'm going out on a limb here, but it looks like you need contacts.
Chow: Maybe.

Of course, it's been established that it's very hard to aim the eye beams of the Pig Talisman because, you know, you've got red-hot beams of heat shooting out of your eyes. Coupled with Chow's need of glasses, he was never going to be a perfect shot. Whenever his glasses are taken off any other time, he seems perfectly fine without them.