Everything About Fiction You Never Wanted to Know.
(Redirected from Blinx the Time Sweeper)
Jump to navigation Jump to search 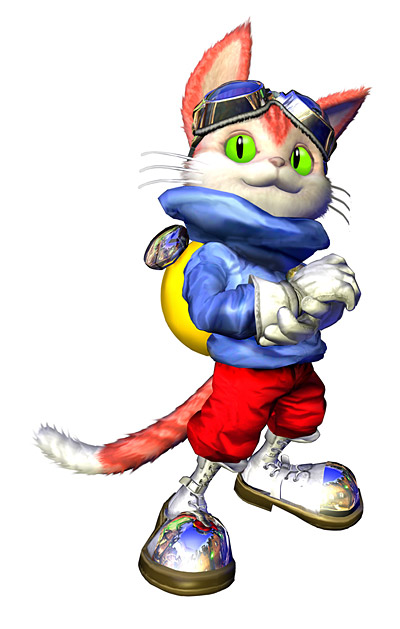 Blinx the Time Sweeper is a platform game by Artoon and Microsoft Game Studios, for the original Xbox. It was an ill-fated attempt to give the console its own mascot, like Mario or Sonic, but the game failed due to clumsy controls and an overall negative reaction from game fans, sending Blinx to an early oblivion... but not before starring in the game's only sequel Blinx: Masters of Time and Space.

Blinx, so the story goes, is a Time Sweeper, an employee of the Time Factory dedicated to the creation, distribution and maintenance of time all across the dimensional axis. His job is important because if glitches in time aren't found and fixed hastily, they could result in Time Monsters that threaten innocent civilians. When a group of evil pigs called the Tom-Tom Gang cause a major disruption in Dimension B1Q64, the Time Factory stops its time stream, freezing all of its inhabitants indefinitely. In spite of this, Blinx receives a Distress Call from a young local princess, Lena, pleading for help.

Disregarding orders, Blinx leaps into a Time Portal and sets out to help her.

Tropes used in Blinx include:
Retrieved from "https://allthetropes.org/w/index.php?title=Blinx&oldid=1714051"
Categories: