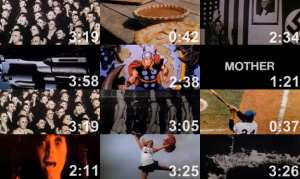 Timestamps come from this Youtube clip minus a minute of Beatty. Whether It Makes Sense in Context depends on your definitions of sense and context.

The term "blipvert" comes from Max Headroom and referred to highly time-compressed advertisements. More generally, a blipvert is a brief collection of often-random images cut together very quickly. The Trope Namer made Your Head Asplode.

Note that blipverts only refer to very high speed montages. If it's a few seconds to pause on each, odds are it's just a normal "Previously On...".