Everything About Fiction You Never Wanted to Know.
(Redirected from Blood Plus)
Jump to navigation Jump to search 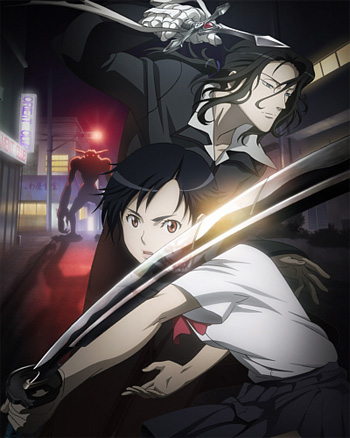 Hagi and Saya, with a Chiropteran in the background.

Saya Otonashi is seemingly an Ordinary High School Student in Okinawa, aside from her amnesia and anemia. All she wants is to compete in track and spend time with her American adopted father George and her (also adopted) brothers, moody Kai and innocent Riku. However, Saya's world changes forever when she's attacked by a Chiropteran, a hulking, bat-like humanoid monster. This prompts a rescue by Hagi, a mysterious, handsome stoic who seems devoted to protecting Saya. Hagi kisses Saya, forces her to drink his blood, then gives Saya a sword coated with her own blood. This event cause a strange transformation in Saya; her eyes glow red and she becomes a fighting machine, quickly killing the Chiropteran. Afterwards, answers are refused while even more strange accidents occur all around Saya; eventually, she is forced into leaving her home to help a secret organization called Red Shield stop a mysterious entity only known as Diva. However, not everything is black and white, and Saya soon begins to doubt her reasons to fight, her allies, and her own humanity.

Blood+ is a 50-episode-long anime which is loosely based on the OAV Blood: The Last Vampire; the film and the series share the basic premise, the characters of Saya, David and Lewis (all of whom are re-imagined in Blood+), and the Chiropterans, but otherwise have little in common. With a beautiful soundtrack, a dark and smoothly flowing storyline, and empathetic characters, Blood+ is a memorable and wonderful series.

Tropes used in Blood+ include:
Retrieved from "https://allthetropes.org/w/index.php?title=Blood%2B&oldid=1759799"
Categories: