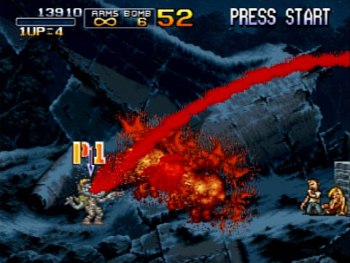 Just had to eat at Denny's, didn't you?

Generally, bleeding isn't a good thing; what with the whole "bleeding to death" bit and there usually being an angry person nearby wanting to make you bleed some more. However, some have the ability to turn their lifeblood into the deathblood of their adversaries.

Whether it's a vampire, "blood mage," alien, mutant, demon or more exotic fare, this character can kill with Bloody Murder, the ability to use blood as an offensive weapon. Possible weapon mechanisms include:

These characters might have Black Blood or Alien Blood as side effects/causes for their powers, but will usually have at least Hollywood Healing or a Healing Factor to deal with multiple open wounds. Often this is justified by saying that controlling the blood allows for faster healing.

Not to be confused with Rustproof Blood.

Examples of Bloody Murder include:

Retrieved from "https://allthetropes.org/w/index.php?title=Bloody_Murder&oldid=1902622"
Categories:
Cookies help us deliver our services. By using our services, you agree to our use of cookies.