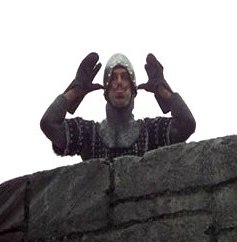 When a character blows a raspberry at someone. Also called "giving someone the raspberry." Also known as the Bronx Cheer, it is a mild taunting gesture that tends to signify immaturity in the user. Done by sticking one's tongue out, and usually placing each hand spread-fingered and thumb-in at the ears, and then blowing, making a "pthththt" sound. The origin of the term is Cockney rhyming: "fart" -> "raspberry tart".

If they also pull their eyelid down, then it's not this trope, it's Eyelid-Pull Taunt.

Examples of Blowing a Raspberry include:

Adios, Brucie. I guess I should salute you as a worthy adversary and all that, but the truth is I really did hate your guts.