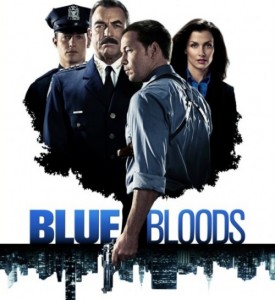 Think every family in the Crime And Punishment genre is on the bad guys' side? This family is different. The Reagan family is a cop family, not a robber family. A four-generational family with a retired Police Commissioner from Ye Goode Olde Days as the great-grandpa, current Police Commissioner Frank Reagan as The Patriarch, his sons who are all cops and his daughter who is a DA. And their children (two of which have declared they are seriously considering joining the NYPD). They live together, quarrel but stick by each other. Because the family that arrests together stays together.

They have different personalities. Grandpa Henry is a hardbitten chief from the old days. Frank is an incorruptible patriarch and responsible leader, who knows how to keep peace between his children and how to encourage them without giving undue favoritism. Danny is a ruthless but competent cop who always catches the bad guys. Erin is a stickler for points of law but she can also manipulate the law to her advantage when seeking a conviction. And Jamie is an idealist who feels a call to serve and protect. They are all loyal to each other and they all serve the cause of keeping order in the city of New York.

Blue Bloods is a Crime and Punishment Series airing on CBS since 2010.

Tropes used in Blue Bloods include:

Danny: And where was Mister Bines during all this?
Detective: Oh, right, I forgot to tell you. He was at the arsenic store.

Grandpa Henry: Are you kiddin'? He'll get one look at this table and run the other way.

Jackie: You've been playing those video games again, haven't you?

I'll be watching you. And so will the thirty five thousand police officers in this city.

"Since you're New york City Police Detectives, and I'm just a hick cop whose job consists of chasing drug dealers off he golf course."
Danny: That sounds about right to me.

Ms. Hernandez: [to Danny] Some cops got shot? Too bad. What you call -- "hazards of the occupation"?

Frank: 271 line of duty deaths since I joined the force.

Joey Sava: What're you gonna do?
Danny: What am I gonna do? This. [POW]

"I'm tired of playing second fiddle to the NYPD."

Danny: Okay. Here's how my testimony's gonna go. The suspect grabbed a sword down the wall, I ordered him to drop the sword, he failed to comply, bladda bladda bladda, I feared for my life, so no had no choice but to fire my service weapon striking him several times in the chest and face."

Reagan: I have to take this call, Your Honor.

Garrett: Too young? Too old?
Frank: More like the type that asks too many questions.

Linda: I was saying grace.
Danny: Yeah, and Erin's spinach isn't soggy.
[Erin glares at him]

Garrett: There's even a music video version now. Set to "Another One Bites the Dust." Wanna see it?

Danny: We're in a union.
Parker: And I'm happy for you.

(to the mayor) "I serve at your pleasure... but I work for the people of New York."

"How does it feel to be defending a rapist?"

"We all die, Sonny, it's just a question of when."

Perp: I give up.
Danny: Too late. [punches his lights out]

Jackie: What happened to you?
Anna: [icily] I grew up.

Mrs. Milo: [to Erin] I don't know what fancy place you come from, but from where I come from, there is nothing worse than a rat!