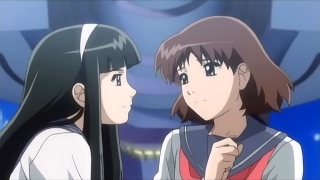 The manga consists mainly of one-shot stories, presented in two series, describing the struggles of human society with the Arume in charge. The main recurring character in the first series is Yui, who is a human/alien hybrid and a member of the earth resistance. An important theme is the Arume's use of children to fight the semi-sentient remnants of their biological weaponry in the earth's seas. The second series , Blue Drop - Tenshi no Bokura (Angel's Men), adds some gender-bending to the mix and often contains very graphic (and very horrifying) sexual scenes and themes. Blue Drop's third Manga is a short, romantic story called Maiorita Tenshi which chronologically is set between the anime and Tenshi no Bokura. Lastly there is the Manga Tenshi no Itazura (Angel's Prank), the shortest Blue Drop work being only three chapters in length.

The anime series is called Blue Drop - Tenshitachi no Gikyoku (Angels' Play) and describes the antics of Hagino and Mari. Hagino is the commander of an Arume battleship; Mari is the sole survivor of a disaster caused by that ship five years earlier. The story focuses on the gradually intensifying relationship between the two girls, set against the threat of the Arume invasion and Hagino's rising doubts about its purpose.

The subbed version of the Anime currently has a free legal stream on YouTube courtesy of the animenetwork, although restricted to certain countries.

Tropes used in Blue Drop include:
Retrieved from "https://allthetropes.org/w/index.php?title=Blue_Drop&oldid=1014543"
Categories: