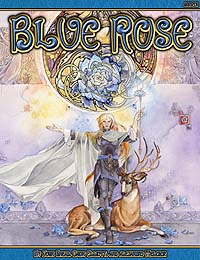 Blue Rose is a fantasy tabletop role-playing game published by Green Ronin in 2004. Its innovative mechanics, based on a revised version of the D20 System, formed the basis of Green Ronin's generic True20 system.

Blue Rose aims to emulate the genre of fiction the game's writers describe as "romantic fantasy"—that is, Feminist Fantasy of the sort published by authors like Mercedes Lackey, Tamora Pierce and Diane Duane. The setting is the world of Aldea, which superficially resembles a Medieval European Fantasy setting but is actually post-apocalyptic, the world having been devastated by wars between rival sorcerer-kings a few centuries back. Player characters are usually agents of Queen Jaellin of The Kingdom of Aldis, defending queen and country against threats both internal and external.

Tropes used in Blue Rose include: