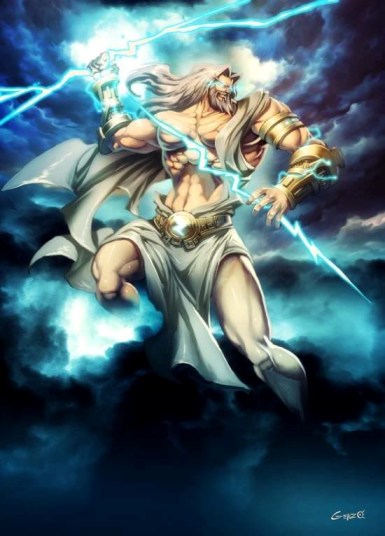 Whether your local God is evil (in either sense) or a nice guy, you do not want to piss him off. Annoying the Lord of the cosmos with such things as common blasphemy, refusing to go along with Because Destiny Says So, and refusing to believe in him despite all evidence to the contrary tends to invoke his wrath. The most common form of aforementioned wrath? A lightning bolt to the face.

Said lightning tends to come out of nowhere (even indoors) and sends the very clear message that the big guy upstairs is not to be trifled with.

Occurs in both Greek Mythology and The Bible, making this Older Than Feudalism.

In Tabletop Games, this may be used as a more localized form of Rocks Fall, Everyone Dies, designed to let the Game Master strike down the annoying Munchkin ruining the game without too much collateral damage.

In a commonly seen sub-trope, a character will swear that if they're lying, may God strike them down. God, of course, immediately obliges. Compare Holy Hand Grenade. Unrelated to Personal Raincloud, though that often involves bespoke lightning bolts as well.

Examples of Bolt of Divine Retribution include:

Retrieved from "https://allthetropes.org/w/index.php?title=Bolt_of_Divine_Retribution&oldid=1886523"
Categories:
Cookies help us deliver our services. By using our services, you agree to our use of cookies.