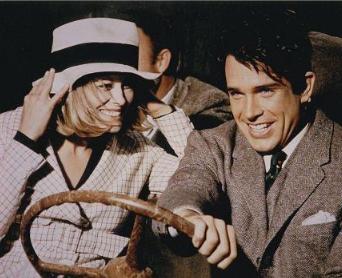 Bonnie and Clyde is a 1967 biopic about the famous bank-robbing duo of Bonnie Parker and Clyde Barrow, played by Faye Dunaway and Warren Beatty. Dunaway's Bonnie is a bored waitress who goes off with small-time crook Clyde on a lark. Bonnie and Clyde graduate to bank-robbing and murder after being joined by Clyde's brother Buck (Gene Hackman), Buck's wife Blanche, and gas-station attendant C.W. Moss. The Barrow Gang becomes infamous. They capture, humiliate, and release a Texas Ranger, Frank Hamer, who swears vengeance.

The Barrow Gang is caught in a shootout from which Bonnie and Clyde escape, but Buck is killed and Blanche is blinded and captured. Hamer tricks Blanche into revealing the location of Moss, who is hiding out with his father. Daddy Moss, who hates Bonnie and Clyde for luring his son into crime, makes a deal with Hamer to lay an ambush for Bonnie and Clyde. Hamer fakes a flat tire by the roadside, and when Bonnie and Clyde stop to help, they are killed in a fusillade of bullets.

Bonnie and Clyde was a smash hit that made huge stars out of Beatty and Dunaway. It was nominated for ten Oscars and won two, for Best Supporting Actress (Estelle Parsons as Blanche) and Best Cinematography. It is regarded as part of the first wave of the New Hollywood movement that helped to break down the studio system and usher in a creative rebirth for Hollywood, with its increased sex and violence, glorification of anti-heroes, and skepticism of authority.

Tropes used in Bonnie and Clyde include:
Retrieved from "https://allthetropes.org/w/index.php?title=Bonnie_and_Clyde&oldid=1922002"
Categories:
Cookies help us deliver our services. By using our services, you agree to our use of cookies.