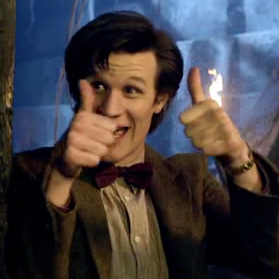 The 11th Doctor endorses this trope.

Certain items of clothing, in the real world, look ridiculous. Bowties are one of these items. Out of fashion for about 40 years now, they look fussy, old-fashioned and slightly dorky to most people.

But not by these guys. For these guys, bowties are awesome. And they will never be seen without one, usually to the exasperation of the people around them; though they think they look like hot stuff, they'll appear to everyone else as... well, fussy, old fashioned, and/or slightly dorky. A certain type of character might be able to pull it off, looking incredibly Badass in the process, or at least managing to look rather Adorkable. Or both!

And one should never forget that no matter what, there's one particularly cool suit that always has a bowtie... a Tuxedo.

See also Real Men Wear Pink, Awesome Anachronistic Apparel. The wearing of a bowtie is notable enough for The Other Wiki to have its own list on the subject.

Examples of Bow Ties Are Cool include: