Evil laughter echoes in the shadow of the night sky's twinkling stars, burdening the universe with the tears of people crying from world to world! Call Galaxy Cyclone Braiger - they will arrive in a second!
—Opening Narration 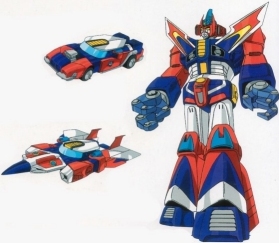 Galaxy Cyclone Braiger was an anime series aired from 1981 to 1982 in Japan. There were 39 episodes aired. It is the first series from the J9 Series.

In the year 2111, the solar system has been colonized. Khamen Khamen wants to destroy the planet Jupiter in order to create a new star and change the solar system. Team J9 is assembled by Isaac Godonov, consisting of himself, Blaster Kid, Stephen Bowie, and Angel Omachi. With the robot Braiger, they are a team that will handle any missions the police will not in the asteroid belt. Meanwhile, Earth has been divided into four power blocs: Omega, Red Dragon, Volga and Nubia. Nubia hatches a plan to rule the solar system in which Jupiter is destroyed, leading to the creation of over 30 smaller planets that could sustain life. However, such a plan would lead to the destruction of Earth.

The series was supposedly inspired by real-life scientific research and used a lot of Korean talents at the lower ranks of production. The show mostly became well known since it was done by manga artist Monkey Punch. Monkey Punch is the pen name of manga artist Kazuhiko (born May 26, 1937), creator of the successful Japanese manga series Lupin III. He was born in Hamanakachi, Hokkaido. Kat first started to work as a manga artist under the pen name Kazuhiko Kat.

It has two sequels: Baxinger and Sasuraiger. Both of which are set 600 and 800 years later respectively.

Tropes used in Braiger include:

Kid: * snatches an enemy craft filled with pleading Mooks out of the air* What do we do, Isaac? They want to be saved.
Isaac: Those who would make good people cry...* eye twinkle with Audible Gleam* ...deserve no mercy.