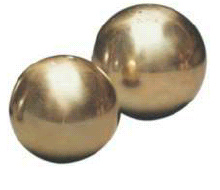 Sometimes a person does something that's very brave or dangerous, this or one of many variants of this statement is said. For example, "Insulting his boss like that... man he got balls of steel!".

Once in a while said for female characters even with lack of such parts. Or adapted into "brass ovaries" or something similar.

Not to be confused with attack on those parts... like Balls of Steel or Groin Attack.

Examples of Brass Balls include:

"Choosing to go naked rather than wear a maid outfit? ....YOU'VE GOT BALLS-ARU!!"

Inner Moka: Well, you've got some big, brass ones, I'll give ya that much.

Ortiz: You're not too bright, man, but you got some big, round, hairy cojones.
Jack: That...is really, really gross, Ortiz.

R.K. Maroon: You got a lot of brass coming in here by yourself.

Big Bad: "That boy's got some big brass ones... He'd better be careful or he'll find them hanging on his Christmas tree!"

"It takes more cojones," he wrote, "to be a sportsman where death is a closer party to the game."

I've got the brass [balls], to fire your ass!