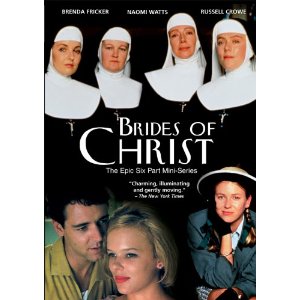 Brides of Christ is a 1991 ABC Australian miniseries set in a convent and a Catholic girls boarding school in Sydney in The Sixties. It begins with two young women, Diana and Veronica, entering the convent of Santo Spirito and later becoming Sisters Catherine and Paul. Many of the issues of the time are broiught up like Vatican II, contraception, The Vietnam War and teenage pregnancy.

Tropes used in Brides of Christ include:
Retrieved from "https://allthetropes.org/w/index.php?title=Brides_of_Christ&oldid=1815243"
Categories:
Cookies help us deliver our services. By using our services, you agree to our use of cookies.