Everything About Fiction You Never Wanted to Know.
(Redirected from Brigadoon Marin and Melan)
Jump to navigation Jump to search 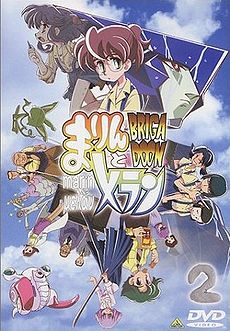 Taking place in 1969 Japan, Brigadoon tells the story of Marin Asagi: an ambitious, innocent, orphaned 13-year-old girl. Not the most ordinary school girl, but she has an adoptive family of colorful characters who care deeply about her and a school friend named Moe Kisaragi. Everything changes one day when an unknown alien world appears in the sky sending out killer robots (called Monomakia) that target her. Luckily, she finds an alien creature named Melan who seems to be protecting her from the assassins. The series focuses on uncovering the mysteries of the alien world, as well as detailing the growing relationship between Marin and her protector.

Cute art, comedic moments, and satiric characters notwithstanding; this series takes itself very seriously. Almost immediately, the action is tense and bloody and humans die.

Not to be confused with the musical starring Gene Kelly.

Tropes used in Brigadoon: Marin & Melan include:
Retrieved from "https://allthetropes.org/w/index.php?title=Brigadoon:_Marin_%26_Melan&oldid=1729603"
Categories:
Cookies help us deliver our services. By using our services, you agree to our use of cookies.