Everything About Fiction You Never Wanted to Know.
Jump to navigation Jump to search
/wiki/Britney Spearscreator 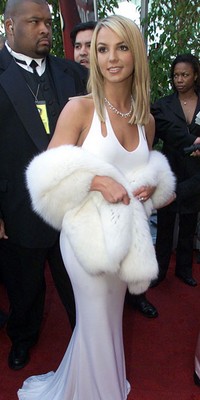 Glammed up for the Grammys.[1]

Britney Jean Spears, (born 2nd December 1981) is a famous pop music recording artist, entertainer, piano player, guitar player, songwriter, fashion designer, author, occasional actor and video director who rose to fame in 1999 off of the success of her debut single "...Baby One More Time." She also had many immensely successful singles and iconic moments in her career. Known for her forward thinking and positive pop music.

A former member of the 90s revival of The Mickey Mouse Club, Britney was the first and the poster girl for the the late '90s wave of boy bands and female solo artists. Part of her rise came from the exploitation of her sexuality, as the seventeen year old Britney flaunted her lolita looks with school girl outfits and tight red leather catsuits, while still having an image of innocence. Her albums and singles sold millions, her videos gained constant rotation on MTV, she made numerous, well-received guest spots on Saturday Night Live as both host and musical guest, she did many iconic VMA performances, she had a hit movie (Crossroads) and received a Grammy nomination (for Best New Artist) and won a Grammy Award for "Toxic" in 2004, many sold out tours and platinum albums and top ten singles later...

The fairy tale couldn't last forever. Starting in 2004, Britney's personal life entered a downward spiral. She engaged in an impulse marriage to a childhood friend in Las Vegas that was quickly annulled. This was followed by a whirlwind romance to backup dancer Kevin Federline. The pairing produced two children, but only damaged Britney's career, as Federline's presence caused cracks to appear in Britney's carefully-crafted public persona as she began to act out in public. A Reality TV series in 2005 (Britney & Kevin: Chaotic, whose viewership started off strong but gradually declined over the show's run) only made the two more fodder for the tabloids, who subsequently began to draw their knives out at Britney. The singer became a victim of her own success. (Though she doesn't see herself as that at all, hates those terms)

Though she ultimately divorced Federline, the break-up culminated in a rather public mental breakdown that resulted in Britney shaving her head among various other unfortunate public incidents (such as a critically lambasted performance at the 2007 MTV Video Awards). This is explained further in her documentary For The Record. As well as her want to be understood, and people to express compassion towards her.

However, she has since recovered, following a court's placement of her in the conservatorship of her father and her lawyer, which is set to continue indefinitely. She continues to perform, and remains a pop cultural figure. To date, she has sold over 100 million records worldwide, and her latest albums, Circus and Femme Fatale, went to #1 on their first weeks of release. She also had one of the five biggest-selling concert tours of 2009. She has made an admirable comeback, with five number ones in four years and 6 number one albums.

She recently became engaged to her beau of over 2 years, Jason Trawick. The two will reportedly wed after she has settled all of her current legal battles.

In May 2012, it was announced that she, alongside Demi Lovato, would be joining the judging panel of the US version of The X Factor.

Guest Appearances and Roles in Television

Britney Spears provides examples of the following tropes:
Retrieved from "https://allthetropes.org/w/index.php?title=Britney_Spears&oldid=1882523"
Categories:
Cookies help us deliver our services. By using our services, you agree to our use of cookies.