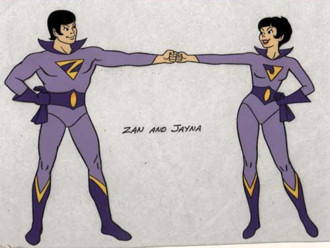 The convention in kids movies and TV shows to make the Kid Heroes a brother and sister. This way, both the sexes are represented and they can be very close, while any thought that they'll end up together is, at least theoretically, killed off immediately. These teams can also bicker a lot more than teams of friends usually do, like siblings in real life, and there's no need to worry that they might "break up".

A subtrope of Sibling Team. They may also be part of a Badass Family.

Examples of Brother-Sister Team include:

Retrieved from "https://allthetropes.org/w/index.php?title=Brother-Sister_Team&oldid=1705721"
Categories:
Cookies help us deliver our services. By using our services, you agree to our use of cookies.