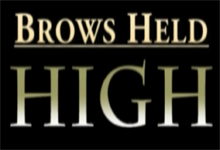 Brows Held High is a comedy review show about Arthouse cinema. It is hosted by Kyle "Oancitizen" Kallgren, who rose to some prominence on the That Guy With The Glasses forums when he wrote a dissertation on Nella's My Little Pony epic.

His signature style usually involves a lot of high-brow intellectual concepts, but explained well enough that they don't go over viewer's heads.

You can find these videos on That Guy With The Glasses and YouTube.

Tropes used in Brows Held High include:
Retrieved from "https://allthetropes.org/w/index.php?title=Brows_Held_High&oldid=1882534"
Categories:
Cookies help us deliver our services. By using our services, you agree to our use of cookies.