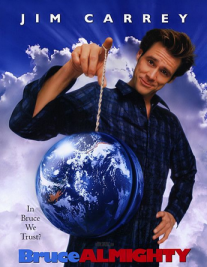 A 2003 comedy film starring Jim Carrey as a down-on-his-luck reporter named Bruce Nolan. After being turned down for a job as an anchorman, he complains to God that He isn't doing His job the right way...so God gives Bruce His powers to see what he can do with them.

Though the film received mixed reviews, it is currently Carrey's highest-grossing film, grossing almost half a billion dollars worldwide. It received a sequel, Evan Almighty, starring Steve Carell as Evan Baxter, a supporting character from this film.

Tropes used in Bruce Almighty include:
Retrieved from "https://allthetropes.org/w/index.php?title=Bruce_Almighty&oldid=1221938"
Categories:
Cookies help us deliver our services. By using our services, you agree to our use of cookies.