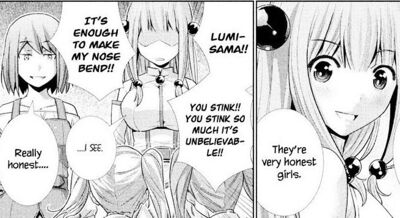 Since everybody in TV land spends all day desperately lying their way out of situations, one of the more reliable gags is to create a situation where you'd imagine the characters would lie, and have them be perfectly honest and straightforward instead.

A common twist on this is when the characters are brutally honest, but then their honesty is not believed. Sometimes, this is used deliberately.

A form of Bait and Switch. Often employed in "The Reason You Suck" Speech.

No real life examples, please; calling somebody a habitual liar is rude.

Examples of Brutal Honesty include:

Retrieved from "https://allthetropes.org/w/index.php?title=Brutal_Honesty&oldid=1945931"
Categories:
Cookies help us deliver our services. By using our services, you agree to our use of cookies.