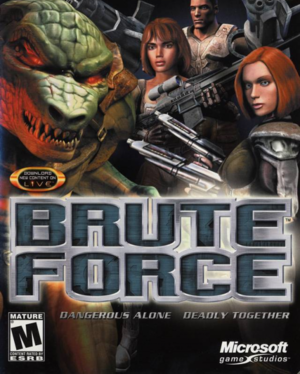 Brute Force is a Video Game released for the Xbox by Microsoft Studios in 2003. The game is a squad-based third-person shooter that uses four members of a team which fight in numerous battles. These members in the squad include Flint, a sniper, Brutus, a shock trooper, Tex, a heavy assault trooper, and Hawk, a scout. Each character on the team has their own strengths and weaknesses. The story is of a science-fiction setting where humans spread throughout the galaxy. Tension arises with the threat of a hostile alien race that appears. The squad, Brute Force, is sent in to confront the enemy. Additionally, each character has their own backstory. Brute Force began as a PC game in 2000, but was soon after turned into a first-party title for the Xbox, following the buyout of Digital Anvil by Microsoft.

Tropes used in Brute Force include:

Retrieved from "https://allthetropes.org/w/index.php?title=Brute_Force_(video_game)&oldid=1699542"
Categories:
Cookies help us deliver our services. By using our services, you agree to our use of cookies.