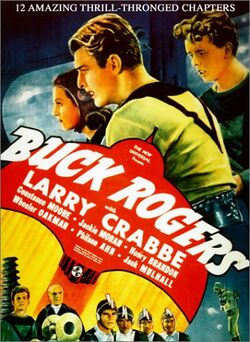 An adventure series about a modern man (mining engineer in the 1920s, astronaut in The Seventies) who is accidentally put into suspended animation, wakes up in the 25th century, and then spends his time as a hero in space.

Over the years it has been seen in various media -- Pulp Magazine, Comic Book and comic strips, film serials, role-playing games, video games, radio, movie and TV series (mmmm, Erin Gray in spandex). Ultimately, these all stem from the popular 1928 novel Armageddon 2419 A.D. by Philip Francis Nowlan, about a time-travelling mining engineer named Anthony Rogers. John F. Dille, the head of National Newspaper Service, convinced Nowlan to turn his novel into a daily newspaper comic strip (changing the lead character's name to "Buck" in the process) and the rest, as they say, is history.

Tropes used in Buck Rogers include:
Retrieved from "https://allthetropes.org/w/index.php?title=Buck_Rogers&oldid=1729968"
Categories: