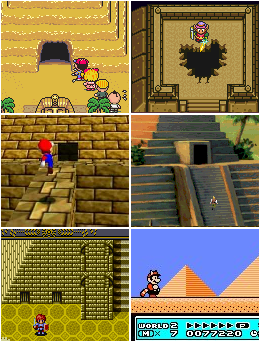 Quick, think of Ancient Egypt. What's the first thing that comes to mind? With 90% certainty, you're thinking pyramids.[2] And why shouldn't you? The Great Pyramid of Giza was the tallest artificial structure on Earth for three and a half millennia and is the only extant example of the Seven Wonders of the Ancient World.

Ancient Egypt is inherently cool. Plenty of writers, primarily in the Fantasy genre, like to have pyramids in their works to evoke an Egyptian feel. These will almost always be found in desert areas, and will usually have some sort of curse. Shifting Sand Land levels in video games will usually feature at least one pyramid on the premises.

For cases in which the historical pyramids have something unusual associated with them, see Pyramid Power. For cases where pyramid-shaped buildings show up in science fiction, see Futuristic Pyramid.