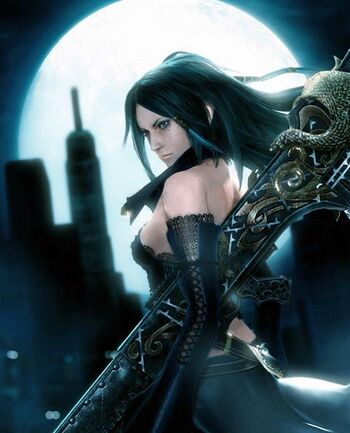 Bullet Witch is a 2007 third person shooter made by Cavia on the Xbox 360 and PC. Taking place in a Crapsack World, you play as Alicia Claus as she kills demons and... well, that's pretty much it. There was something about some guy who killed himself and summoned the demons, but let's face it: no one really cared about that.

The game's highlight was that you played as a gun-wielding witch who could use various spells, like lighting, tornadoes and meteors. Also, your gun could transform into various different weapons. The game fared poorly in markets and only average in reviews. Problems included awful AI and bad level layout, but the fast action and ultra spells got praise.

Not to be confused with Bayonetta. Or Marisa Kirisame.

Tropes used in Bullet Witch include:
Retrieved from "https://allthetropes.org/w/index.php?title=Bullet_Witch&oldid=1700665"
Categories: