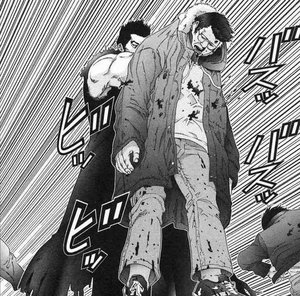 Congratulations! You have been promoted from Mook to Human Shield!

—MacGruber, after using Dixon as a human shield

Action Hero Bob is sneaking into the villain's secret base when he's suddenly spotted! As the enemies open fire with their automatic weapons, Bob grabs the nearest Mook and lets him take the shots instead. While the hapless henchman soaks up the bullets and twitches like a spastic marionette, Bob drags him along and heads for safety.

Fictional works love this trope, giving the hapless Mook the stopping power of twelve inches of reinforced concrete. It's popular with anti-heroes, as it serves to show off the hero's cold-blooded resourcefulness. It's also a trope used by a Jerkass Technical Pacifist; they aren't supposed to kill people, so they grab the nearest enemy and let their opponents take out a few for them. "I didn't kill anybody," says the blood-covered pacifist, after dragging numerous enemies into the paths of other people's bullets.

In Real Life, a Human Shield would probably work against small calibre weapons like handguns. On the other hand, army engineer manuals state that it takes 60 cm (2 feet) of soft wood to stop an M-16 and 120 cm (4 feet) to stop an M-60. But that wouldn't look very cool without some big guns blazing, would it? This trope almost always involves at least one automatic weapon, and the more there are, the cooler it looks. So in Real Life, Bob is likely to find himself in serious trouble; while some shots might stop inside his co-opted Mook, the automatics being fired would have enough power for others to pass through and into Bob. And considering the number of bullets usually taken by the mook, some would miss him and hit parts of Bob that are unprotected because Bob is now standing in one place, and his Mook is unlikely to be bigger than Bob to cover him completely.

The trope can be justified somewhat if the Mook is wearing protective gear like a Bulletproof Vest - the vest stops or slows the bullets on entry, they're slowed more by the body and stopped by the back of the vest. Unfortunately this only works for the areas covered by a vest, and a Mook wearing full body armour would probably survive as well, and won't appreciate being used in this fashion.

A Sister Trope to Human Shield, but while that trope talks about using bystanders as psychological protection, this trope covers the bullet-stopping tendencies of the bystander. Related to Concealment Equals Cover, with the mook serving as the eponymous Concealment.

Contrast with One-Hit Polykill, where the bullets do go through the Mook to hit Bob, Shoot the Hostage and Taking the Bullet. Also see Annoying Arrows, Concealment Equals Cover, Improbable Cover, Magic Bullets and Pocket Protector.

Examples of Bulletproof Human Shield include:

Liz: Yeah, whatever. <BLAM> <BLAM> <BLAM>
Kit: You nearly shot me!
Liz: No, I didn't. Besides, it's not like regular bullets hurt you anyway.
Kit: They do too hurt! They sting!

Cheryl: (screams)
Archer: Shut up! That vest is bulletproof!
Cheryl: Oh. (gets shot in the arm) Ow!
Archer: But it is, you know, a vest.