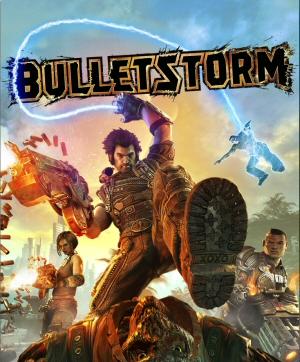 Bulletstorm is a multi-platform First-Person Shooter from People Can Fly, the creators of the Cult Classic shooter Painkiller, and Epic Games, also developers of the Gears of War and Unreal series, using Epic's own Unreal Engine 3.

The game's story, written by Rick Remender, comes straight from a pulp sci-fi serial, starring two former black ops soldiers/assassins, Grayson Hunt and Ishi Sato, members of wetworks unit Dead Echo. After they discover that their superior, General Sarrano, has had them killing innocent people through their entire carreer, Grayson and his team go rogue, Gray swearing revenge for the atrocities Sarrano used Dead Echo to commit. We join Grayson some time later when he and his crew, now Space Pirates on the run from the law, encounter Sarrano's flagship in orbit around the former tropical paradise resort planet Stygia, and Gray's subsequent (alcohol-inspired) kamikaze-attack results in both ships crashing on a planet teeming with mutated psychopathic ferals and all kinds of flora and fauna thirsting for blood. Having been injured in the crash, Ishi's new robotic implants are gnawing away at his mind, and it's up to Grayson to find the fastest way off of Stygia to get Ishi some real medical attention. Unfortunately, the only way to do so is to find Sarrano and hitch a ride on his evac cruiser.

A major feature of gameplay is the 'Skillshots' system, which rewards the player with points for finding gruesome and creative ways to kill enemies. These points can then be spent upgrading your weapons and buying ammunition, fueling even more extreme ways to dismember or disintegrate the freaks that attack you at every turn. There's an online co-op score-attack mode.

Tropes used in Bulletstorm include:

The main villains (Representing the military shooter) are completely serious, faceless military men who are in a sterile monochromatic environment, all use the same gun, and their leader is an over-exaggerated Psychopathic Manchild stereotype of immature 12-year-old Call of Duty players.
You, on the other hand, play as a character who is clearly enjoying himself creating the most Cruel and Unusual Death possible, in a colorful, zany and chaotic environment against hordes of bizarre monsters... which easily represents unrealistic over-the-top shooters such as Borderlands.
The Take That comes in that Epic and People Can Fly do not paint the enemies in a sympathetic light, and... well, they created Sarrano. That's really all there is to say on the matter.