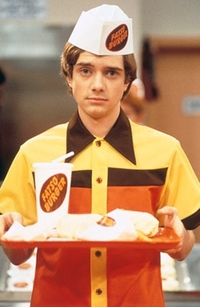 You can practically see his soul being crushed.

The fictional fast-food restaurant is a unique establishment. It's the most common first job for a TV teen, and will usually teach them a lesson about money, responsibility, or life, mere moments before they quit or are fired for odd reasons. Usually, they are spurred to employment by a specific financial need, and a failure of "The Bank of Mom and Dad" to pony up.

But the fast-food joint seems to deliberately go out of its way to torture the unfortunate teenagers (and/or unlucky adults) who work there. Which includes the ridiculous outfit they are required to wear on the job—a silly hat, featuring a cartoonish version of what they serve, is almost a given, along with Happiness Is Mandatory, and this is usually enforced by a store manager who fits the Stupid Boss stereotype to a Q. Thus the fast food restaurant has the image of a Fate Worse Than Death.

The standard foil is for the show's underdog to thrive in this environment to the total befuddlement of the "cool" characters who have been successful at everything else except this; ironically, this can have the reverse effect: after all, who would be proud of working at a fast-food joint?

The Other Wiki refers to these as "McJobs". In reality, these jobs can be Truth in Television, but there's an equal chance of them being better (or worse) than depicted, because it depends on an individual store's quality of management and workers. The ridiculous headgear, fortunately, is universally less common than it is in fiction (a simple baseball cap, visor, or hairnet is more common).

And yes, the trope title is a medieval-appropriate riff on "Burger King."

Examples of Burger Fool include:

Retrieved from "https://allthetropes.org/w/index.php?title=Burger_Fool&oldid=1883833"
Categories:
Cookies help us deliver our services. By using our services, you agree to our use of cookies.